I had some editing to do the other day that, for one reason or another, I wanted to do on my Windows machine. I tried several open-source utilities, but none of them can cut the mustard like Adobe Premiere Pro can.

However, the only legitimate version I have is Premiere Pro CS3, vintage 2007, purchased for good money back then (which I’ve all made back, thanks to a three-day editing job I got for BBC interactive, literally a week after I bought it). Those were the days before Full HD video was commonplace, and way before anyone dared to mention the idea of 4K. But I digress.

So I tried to install Premiere under Windows 10, and to my surprise all worked rather well – until the registration part came and told me that this app could no longer be activated.

Let’s see how we can bring this version back to live in 2017.

Luckily, the provided “activate over the phone” option was still available, but only an automated message was at the other end. It told me that phone activations have stopped, and that I should instead go to http://adobe.com/go/activation.&nbsp;

Here I found that the ageing CS2 and CS3 registration servers had to be retired, and that Adobe would issue me a new serial number as soon as I login with my Adobe ID and provide my original serial. Two such links were provided, one for CS2 and one for CS3 apps. I followed the appropriate link and got indeed a new serial. Hurrah!

In addition, the system said that I’d need to download a new “special version” of the app in order to run it with the new serial, and that installations from the original DVD are no longer supported. So I downloaded that too, uninstalled the original and re-installed as instructed. It all worked rather well.

As an added bonus, you’ll get download links for both the Mac and Windows versions, even though the original purchase was not cross platform. Thank you, Adobe!

Patching to the latest release

You’d think that the “special version” would contain the latest patch that was released for Premiere Pro, but to my surprise it is just like the disk version, namely 3.0.0. I remember there had been several patches over the course of about two years until CS4 was released.

Luckily, we can still download those too, namely from this long list of all Adobe Product Updates over the years.  Specifically, the latest Premiere Pro patches for Windows can be found here. For my particular case, the last update was 3.2.0, released in April 2008, and can be found here.

Now Premiere Pro CS3 is once again running strong under Windows 10 in August 2017. It’s like visiting a time-machine though: outdated dialogue boxes, the light grey (and unchangeable) interface, no native support for Full HD – but those are small things I’m prepared to live with. I’ll cover workarounds for these issues in my next article. 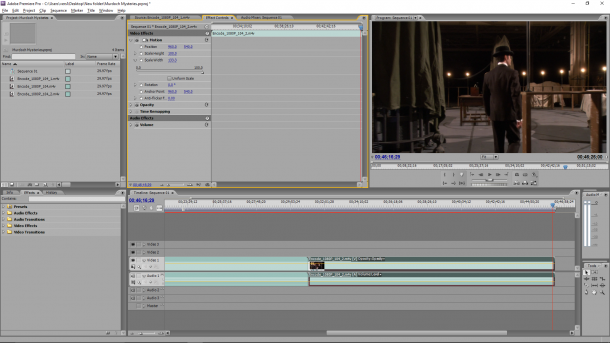 Why not simply upgrade to Premiere Pro CC you ask?

Because I really can’t justify upgrading from $10 a month for a Photoshop CC only subscription to $50 a month for the sake of one additional app. In the past I have purchased Premiere TWICE at the full price $799 (CS3 for Windows, and CS5.5 for my Mac). That clearly has to be enough for an occasional editor like myself. Usually I use it on my Mac, and although CS5.5 is also several years old now, it serves all my editing needs sufficiently. Sorry Adobe.