Enter the Mixer Brush Tool. Here’s how to sample an image and draw with it in Photoshop. END_OF_DOCUMENT_TOKEN_TO_BE_REPLACED 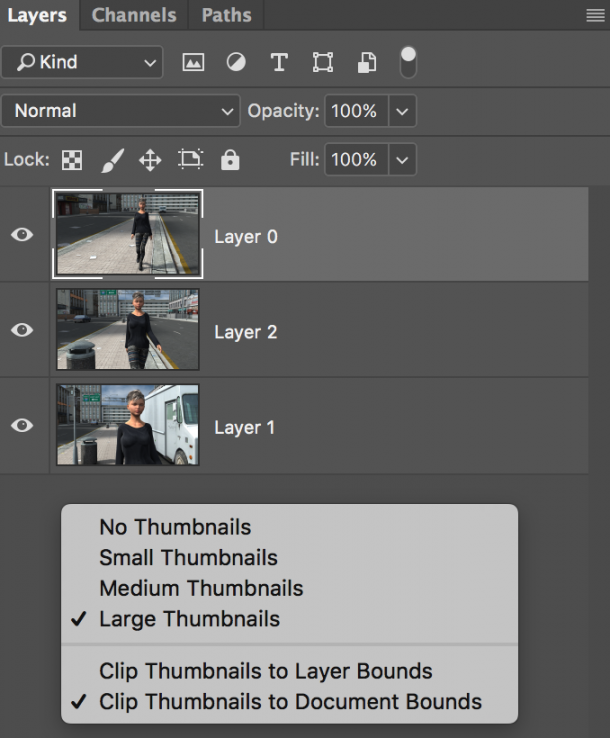 In the Layers Palette, right-click somewhere underneath all layers (in the empty space), then pick a size (small, medium, large). Or choose not to display thumbnails at all.

It’s easy to create an effect of draped cloth in Photoshop, like in the image above. We can do this with the Gradient Tool. It’s the icon with an actual gradient on it, sometimes hiding behind the Paint Bucket or 3D Material Drop tool (if you don’t see it, left-click and hold for about one second for the multiple icons to appear, or press the keyboard shortcut G repeatedly).

Once selected, choose Difference as the mixing mode at the top left of the screen, and make sure that the colours are set to back and white (other colours can give “very creative” effects shall we say).

Now start moving your cursor in short strokes from left to right, then right to left. Every time you change direction, the image is inverted. Add a diagonal stroke in every so often. You’ll create magnificent drape effects in no time!

In this video I’ll show you how to render an image in DAZ Studio and compose it onto a background image in Photoshop.

We’ll use the Shader Mixer and a Shadow Catcher in DAZ Studio to make the figure cast a shadow but be otherwise transparent. In Photoshop we’ll add artificial depth of field to an arbitrary background picture using Smart Objects, and I’ll introduce some techniques to blend both images together for extra realism (all non-destructively).

The final picture is going to look like this (featuring the 3D Universe Toon Crab and a new lifeguard tower in my neighbourhood). 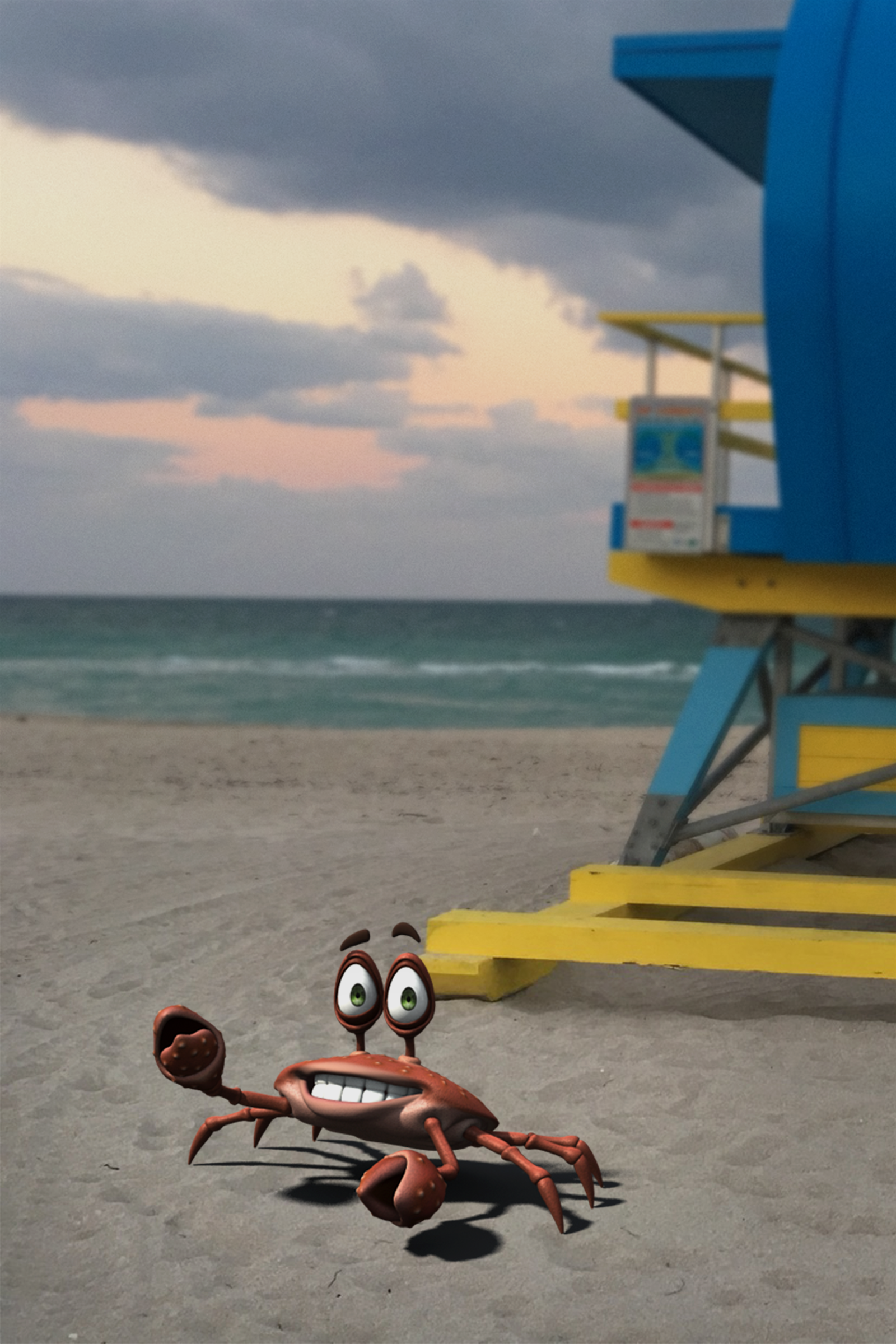 The whole video is nearly 40mins long, so grab a cup of tea and enjoy.

In this episode I’ll show you how to render an image in DAZ Studio and compose it onto a background image in Photoshop.

We’ll use the Shader Mixer and a Shadow Catcher to make the figure cast a shadow but be otherwise transparent in DAZ Studio. In Photoshop we’ll add artificial depth of field to an arbitrary background picture using Smart Objects, and I’ll introduce some techniques to blend both images together for extra realism (all non-destructively).

In this episode I’ll show you how to combine an image sequence into a video file using Photoshop CC 2017.

This is helpful if you’ve rendered a series of still images from a 3D application and would like to create a video file from them. I’ll go over how to import the whole sequence, duplicate it a few times and even add a fade in and fade out.

Up until now I had always used Premiere Pro to assemble image sequences of a rendered animation.

I’m still using Premiere Pro CS 5.5 and I’m not currently subscribing to the whole Creative Cloud package. As such, my version of Premiere is stuck somewhere in the past, when 4K was barely an idea, and 1080p was the highest result you would ever need.

The trouble is, I was working on an animation whose resolution was larger than 1920×1080. While Premiere Pro CS 5.5 can handle this and higher resolutions for editing, there doesn’t seem a way to export it at anything above 1920×1080.

My editing needs were moderate at best: assemble 250 frames, repeat those several times, and add a fade to black either end. Which application would be capable of doing this swiftly and efficiently, I wondered?

Photoshop CC can do it! Would you believe it? Here’s how.

END_OF_DOCUMENT_TOKEN_TO_BE_REPLACED Manga Studio has a really nice feature that I have been looking for in Photoshop for some time: a Selection Brush.

In addition to the usual lasso, marquee and Magic Wand tools, there is a way to simply paint over a part of your image, which then becomes part of (or reduces) the current selection.

Turns out this feature (and then some) is part of Photoshop too – it’s just not called a Selection Brush. Although from what I understand, there is such a feature in Photoshop Elements (a different product entirely).

In Photoshop, this tool is called the Quick Mask feature. It’s dead simple and extremely versatile. What’s not to like? Here’s how to use it:

END_OF_DOCUMENT_TOKEN_TO_BE_REPLACED I was doodling away in Photoshop, one hand on the keyboard and the other using my Wacom pen, when out of a sudden this crazy cyan blue line appeared right across my canvas. Super annoying!

My Intuos tablet has a mind of its own sometimes, selecting things that I don’t want, and perhaps this was one of those occasions. Or perhaps I had accidentally hit one of the gazillion keyboard shortcuts that does something I didn’t even know Photoshop could do. Who knows.

Either way, I had an ultra annoying line across my document, and there didn’t seem to be a way to get rid of it. Here’s what it looked like: Moving the document also moves the line, so it had to be something that could be turned off. But how?

END_OF_DOCUMENT_TOKEN_TO_BE_REPLACED Did you know there is a way to open several images in the same document as layers in Photoshop?

It’s a real timesaver if you have several renders that all need to be composited onto the same background for postwork.

It’s really easy to do:

When it’s done you’ll have all images open in the same document, stacked on top of each other in a new layer. Thanks to Julianne Kost for this valuable tip!