I had some editing to do the other day that, for one reason or another, I wanted to do on my Windows machine. I tried several open-source utilities, but none of them can cut the mustard like Adobe Premiere Pro can.

However, the only legitimate version I have is Premiere Pro CS3, vintage 2007, purchased for good money back then (which I’ve all made back, thanks to a three-day editing job I got for BBC interactive, literally a week after I bought it). Those were the days before Full HD video was commonplace, and way before anyone dared to mention the idea of 4K. But I digress.

So I tried to install Premiere under Windows 10, and to my surprise all worked rather well – until the registration part came and told me that this app could no longer be activated.

Let’s see how we can bring this version back to live in 2017.

Here’s a list of handy keyboard shortcuts for Adobe Premiere Pro. I keep forgetting these little helpers every 6 months or so…  By no means an extensive or complete list, here are the ones that I like using: Timeline SPACE – Playback at 100% K – Stop J – Play 100% backwards (multiple presses accelerates …

In this episode I’ll show you how to use existing items of clothing and re-fit them to a other characters in DAZ Studio, using Marvelous Designer. Although auto-fit does work in many cases, it can also give extremely ugly results, and by having Marvelous Designer re-fit clothing, this can be greatly improved. https://www.versluis.com/wp-content/uploads/2018/08/How-to-fit-DAZ-Clothing-using-Marvelous-Designer.mp3Podcast: Download (Duration: …

Turntable animations show an object or a collection of objects from all sides. They’re usually rendered as a loopable image sequence. The above is such an example of Michael 7, assembled as a GIF image. He’ll keep spinning forever!

Let’s see how we can create something like this in DAZ Studio.

To export a single Shape Key as OBJ file, all we have to do is set the desired Shape Key to 1 (or whatever value we like) and use the File – Export dialogue to create an OBJ with the shape/morph applied. However, if you have several dozen Shape Keys that need to be exported, …

Blender stores Morph Targets as Shape Keys. Those can be accessed and created in the palette that resembles the Flux Capacitor icon (it reads Data when you hover over it).  To store one object’s shape in another one as a Shape Key, do the following: import both objects into Blender SHIFT-select both objects make sure …

In this video I’ll show you how to fix the partially obstructed or occluded Viewport Controls bug in DAZ Studio. I’ve experienced this problem when I have the Shader Mixer tab docked somewhere, but it stands to reason that other docked panes also have the potential of causing this bug. https://www.versluis.com/wp-content/uploads/2018/08/Obstructed-Viewport-DAZ.mp3Podcast: Download (Duration: 4:29 — … 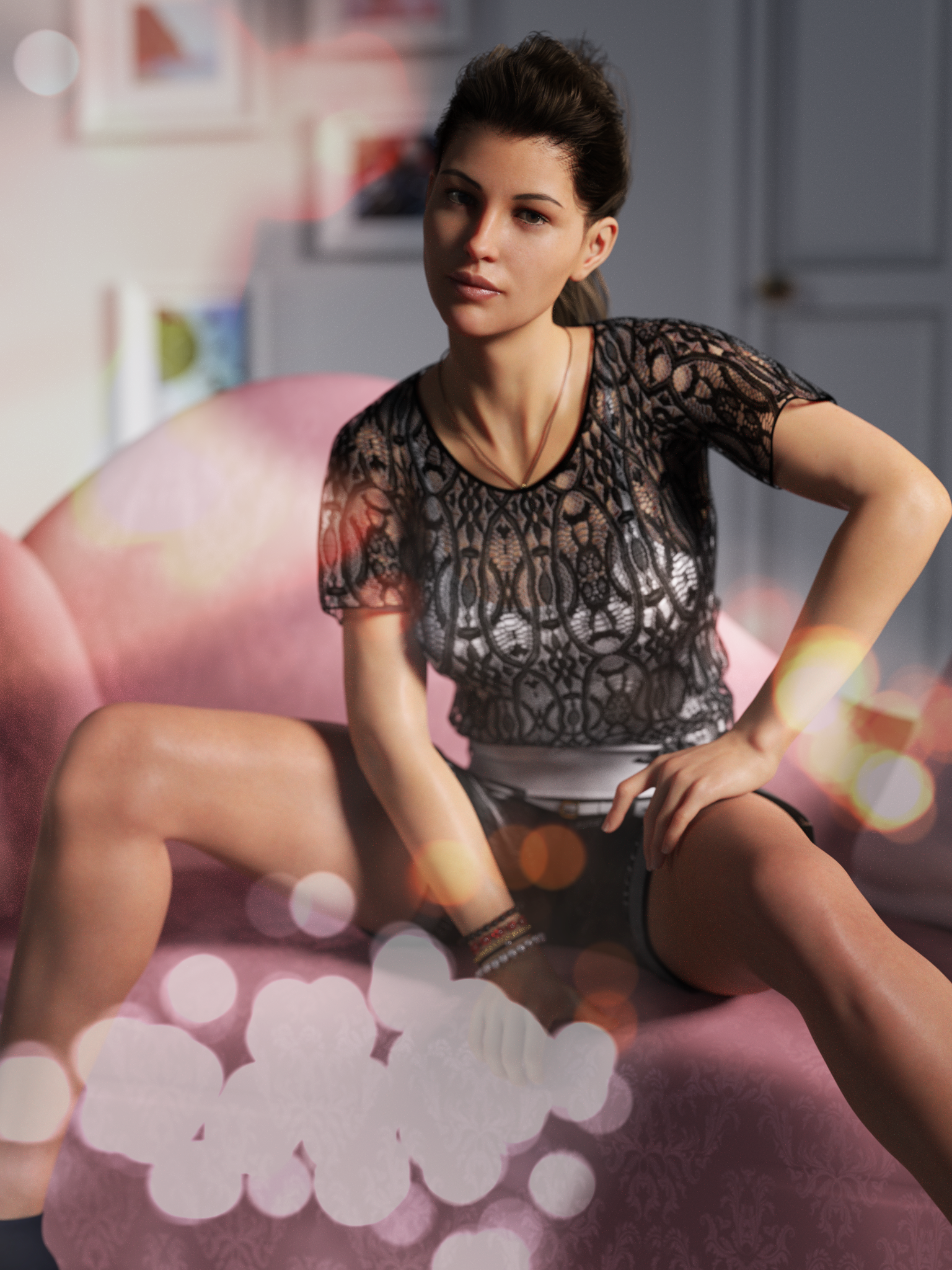 Photoshop has an interesting set of filters that let us turn ordinary images into fascinating Bokeh Effects. Those can be useful as a nice alternative for gradient backgrounds due to the elements of randomness they can bring, or for foreground effects akin to those created with plastic cameras.

The above uses a Bokeh Effect as additional foreground pattern. Let’s see how it’s done.

In this episode I’ll show you how to export assets from DAZ Studio to Blender and back, at a consistent scale and orientation. The default Blender export preset in DAZ Studio is broken, hence the workflow requires a bit of tweaking and knowledge on how Blender thinks about units and scale (which I’ll also show …

In this episode I’ll show you how to create a string side light in DAZ Studio 4.9. The default light looks very soft and does not create a dramatic effect, so we’ll see how to remove those first, and then apply our own parametric spotlight. In addition, we’ll add and tweak the default IBL to …

I recently recorded a quick voiceover in Adobe Premiere Pro CS 5.5, but I ran into an issue for which the fix wasn’t exactly obvious. Here’s the problem: When you mark a track to record some audio and start the recording, the full mix is being played back through your speakers (or headphones). This includes …

Opening several JPG or PNG images in Photoshop is the easiest thing in the world: just select several in the Windows Explorer or in the Mac Finder, right-click to choose Open, and Photoshop brings in each image as a new document.

But when we try the same with raw images, it won’t work: although Photoshop shows us the raw processing dialogue for all our chosen images, and lets us make individual changes, as soon as we hit Open at the bottom, only the current image is opened as a new document.

What gives? How can we open and convert several images at once?

In this episode I’ll show you what a Shader Browser is in Carrara and DAZ Studio. I wish Blender had one – perhaps there’s one in the works? We’ll talk about how it could be integrated as part of the Blender Cloud Add-On too. This video was inspired by a discussion we had over on …

Enter the Mixer Brush Tool. Here’s how to sample an image and draw with it in Photoshop.

While we were discussing how to generate a terrain in my previous post, the next question is of course how to we give our terrain different colour values depending on its height. For example, at the very top of our terrain we may have snow covered mountains. Slightly further down we have yellowish rocks on …

Sometimes we need to scale an object in two axis at the same time. Think of making a cylinder thinner rather than shorter at the same time, which would happen if we’d scale the whole cylinder. However, scaling the X and then the Y axis is cumbersome during modelling. Carrara has such an option: hold … 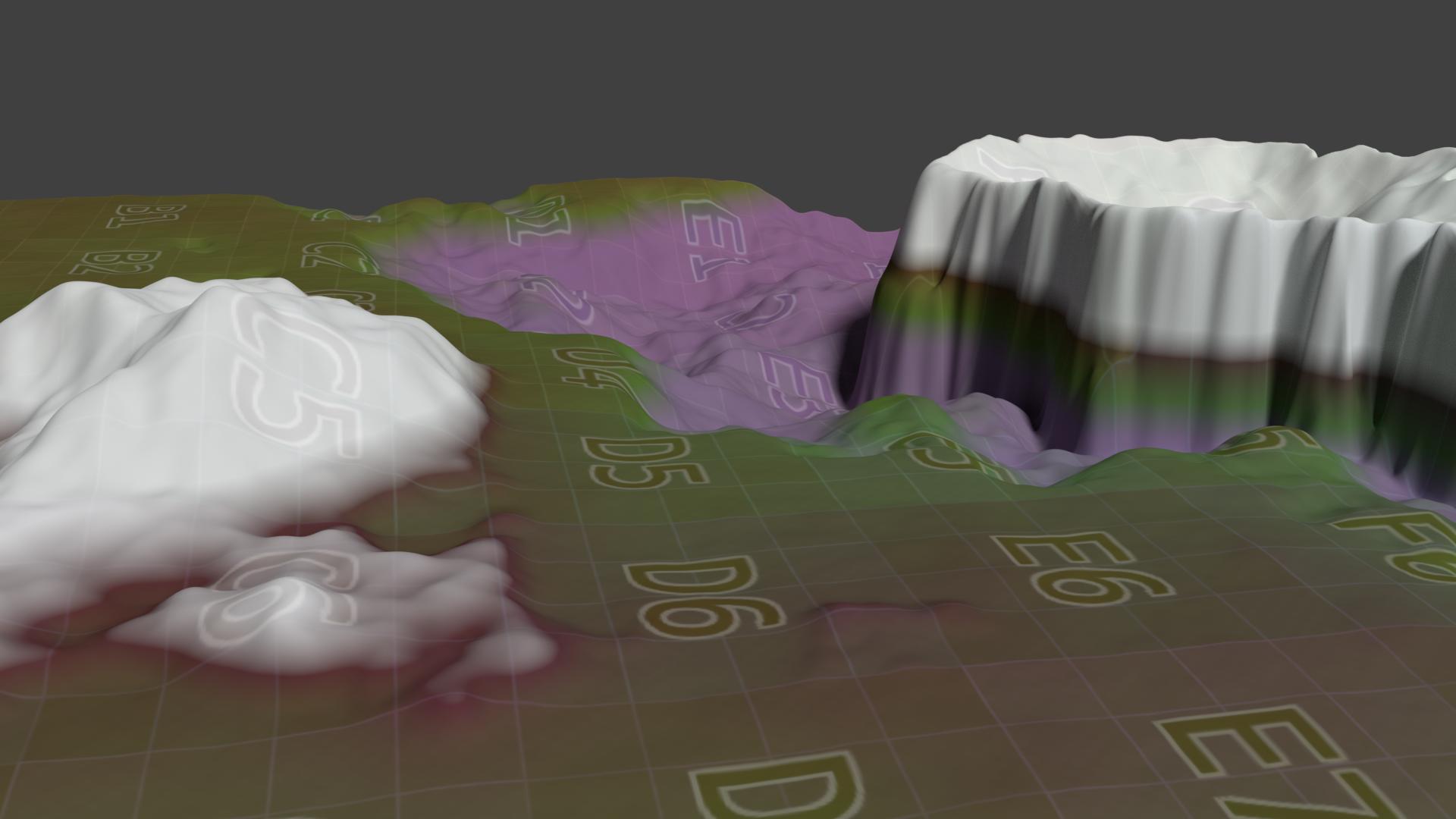 Did you know that Blender can create fabulous terrains from nothing but a greyscale height map? Of course it can!

In this article I’ll show you how to do it step by step. Grab your height map, fire up Blender and let’s get started. 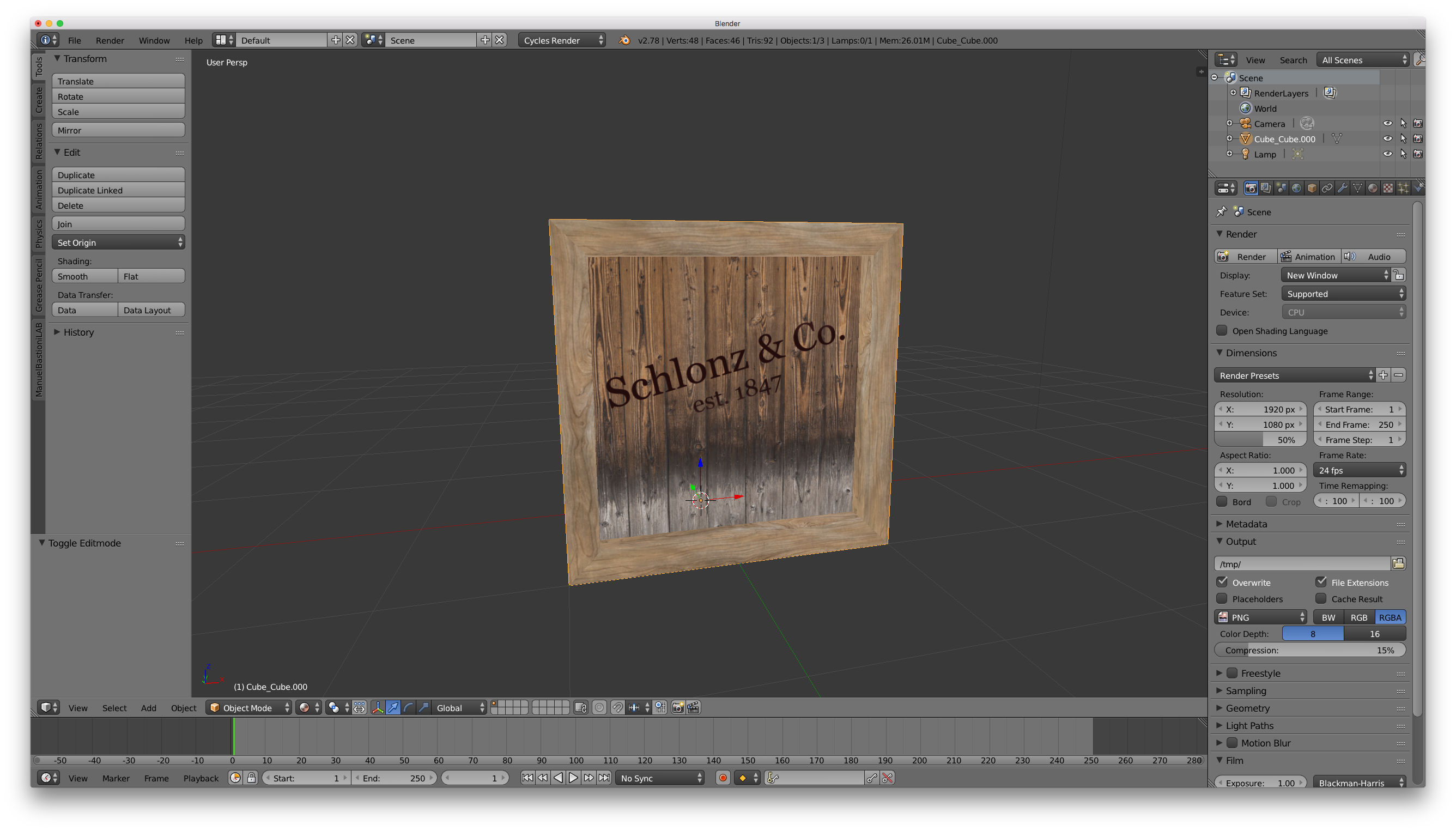 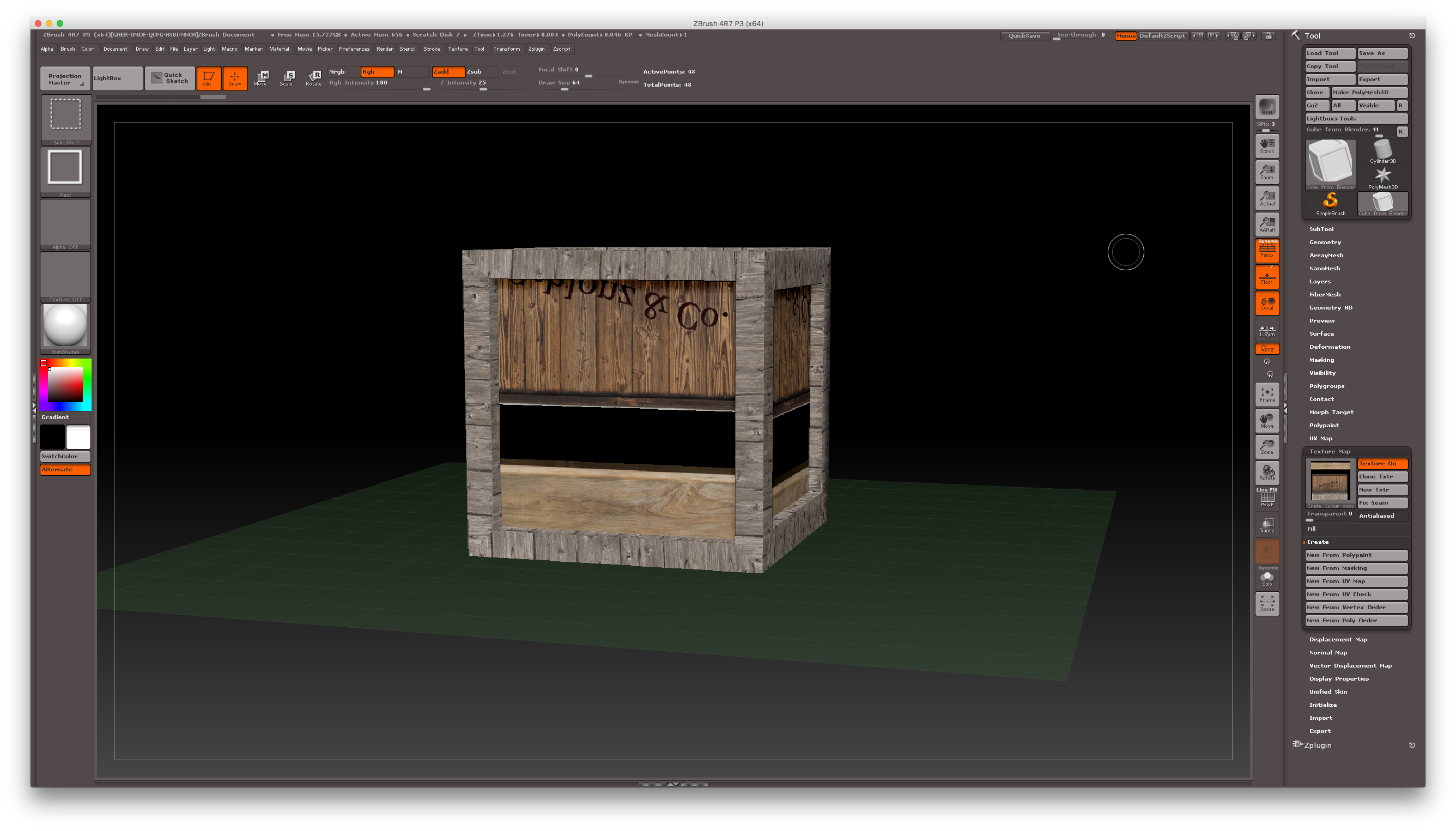 I’ve just learned that Blender has a wonderfully helpful function called Local View. This will isolate a selection, zoom in on it, and hide all other items in the scene. Using Local View again will bring back all items as they were seen before.

Thanks to Darrin Lile for this tip!

We can execute Local View with the default keyboard shortcut “Numpad /” (the division operator on your numpad) – but of course that only works if you have a numpad. On my Windows system I have one, but sadly on my Mac and my laptop I do not.

In this article I’ll show you how to map this shortcut to another key. Let’s get started!

Sometimes you experiment with keyframe animations, but frequently things can go wrong and you want to start afresh. Like clearing the sheet of paper you were sketching on. How do we do that to a timeline? Easy: even though there’s no magic button for it, it can be done using the same technique in both …

Hexagon had a really nice nth-selection tool (1 over n it was called). With it you could select every other vertex or edge or face, creating things like the star shaped pattern above. You’ll be pleased to hear that Blender can do this too! Rather than select every other point though, Blender likes to deselect instead. …

In this episode I’ll show you how to install content you’ve bought for use in DAZ Studio. I’ll go through using Install Manager, DAZ Connect, and I’ll explain how to install content from ZIP archives (bought from marketplaces such as Renderosity or Hivewire). For Dwayne. https://www.versluis.com/wp-content/uploads/2018/08/Install-DAZ-Content.mp3Podcast: Download (Duration: 18:37 — 17.1MB)

Quick and easy: In the Layers Palette, right-click somewhere underneath all layers (in the empty space), then pick a size (small, medium, large). Or choose not to display thumbnails at all.

In this episode I’ll show you how to use aniBlocks to animate a character, how to animate a camera around it like a dolly, and how to merge one scene with another. This is a kind of a “behind the scenes” walkthrough of the following walk animation I’ve rendered recently. I’ve received several comments on …

It’s easy to create an effect of draped cloth in Photoshop, like in the image above. We can do this with the Gradient Tool. It’s the icon with an actual gradient on it, sometimes hiding behind the Paint Bucket or 3D Material Drop tool (if you don’t see it, left-click and hold for about one … 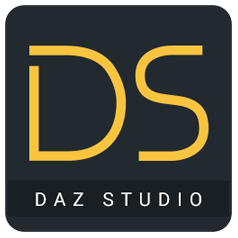 I was setting up an animation on one system, then transferred the scene over to a more powerful rendering machine. Usually DAZ Studio 4.9 does a good job at installing required content automatically (thanks to DAZ Connect), but this time my scene showed up with several scary grey blocks instead of content. In addition, I …

ShadowBox is an interesting feature with which we can create 3D geometry from three intersecting masks. Let’s see how to get started with it step by step in ZBrush 4R7. Select any tool to begin, perhaps something that can serve as a starting point. I’ll use the Dog tool. To do this, hit the COMMA key … 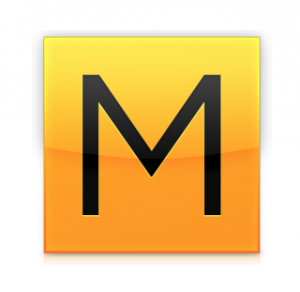 Marvelous Designer (or Marvy D as some fans call it) receives frequent updates with a plethora of new features. With every round new version number, and upgrade fee is necessary – if you bought the software with a perpetual license (like I have, because I genuinely dislike the subscription model… but I digress).

This means that it is very likely that a new version passes you by, and you have the need to download an older version of Marvelous Designer.